D: Odacchi sensei!! Hear me out!! Please draw the 7 Shichibukai who made Luffy and Whitebeard suffer two years ago in the battle at Marineford as kids!! P.N. Harada Yutaka

O: Yeah. Sure-. Now I wonder how they look two years later~~. These are the ones that were in the Shichibukai at the time before the war actually began.

As we all know, Oda just released One Piece 20th Anniversary Special Articles: Portgas D. Ace Episode 1. Right now, only those who purchased the comic in Japan can enjoy the content. So let’s share the information from this Episode 1. 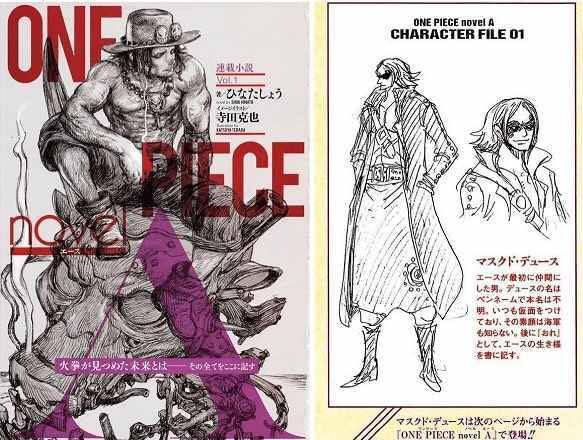 There is a beautiful island in East Blue, and there is a special island with unique ocean current. This ocean current flow in such a way that people can only to go in and unable to go out. The island is surrounded by full of dead bodies…In this island, Ace meets with another guy. Due to Ace’s boat damaged, he already drifted here for 6 days while the other guy was here for 3 days.

This guy felt extreme anxiety and started to talk with the skulls. On the other hands, Ace was planning to build a raft to leave this island but he kept failing. Ace recommended the guy to build a raft together, but that guy rejected the suggestion.

The guy has a dream of writing an adventure novel, he planned to use Ace’s name to write that novel, but Ace rejected. It is because Ace’s dream is much bigger than his dream of writing a novel. The guy always wears a mask, so Ace called it as Masked Deuce. 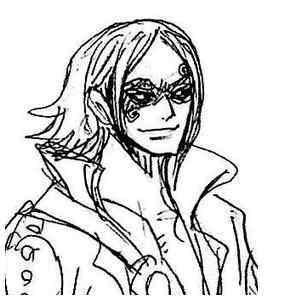 The guy doesn’t really like those people who always sailing in the ocean for pursuing their dream. Both of them kept chatting until late night. Masked Deuce is a medical student who was abandoned by his parent since he was young, so there are no places for him to go. The moment he left his own town, he gave up his name away too. Ace said that although he doesn’t have a parent, he got a lovely brother. His mother passes away after giving birth of him and his father is a highly wanted criminal. Masked Deuce said, “Highly wanted criminal? Hahaha! Can your father be the Pirates King?”

Ace didn’t respond but his facial expression was gloomy. Masked Deuce realized that it might be the truth…

On the second day, both of them still work on themselves separately. Ace continues on building raft while Masked Deuce was looking for food. He couldn’t find any food and decided to go for Ace, who has a lot of fruits on his hands. He was super hungry and decided to find some weapons to attacked Ace, so he can rob some of his fruits from him. However, Ace discovered that Masked Deuce is behind him due to the sound coming from his stomach. Surprisingly, Ace offers him some fruits to eat. 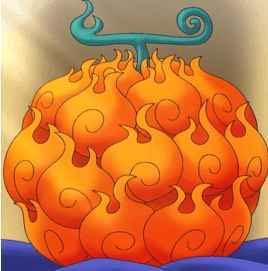 Until evening, Masked Deuce found out that there is some fire on Ace’s body. 1 of the fruits eaten by Ace was the “Flame-Flame Devil Fruit“. Ace worried that he will not be able to swim, which will be tougher for him to escape this island. Nevertheless, Masked Deuce saw a glimmer of hope.

After 1 day, both of them begin to train on fire, and the training was great.

Finally, it comes to the date when both of them want to leave. They’ve prepared all the things and Ace used his fire to push the raft away from the island successfully. 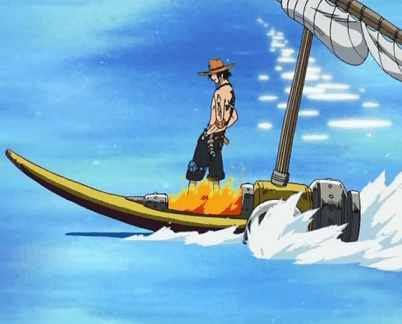 Ace: Do you want to take an adventurous journey with me?

Masked Deuce: I am sure I can write a good novel if I following you.

Both of them shake hand and Spade Pirates was formed.

Source: Family of One Piece

D: In the Straw Hat Crew, Sanji is obviously the one who is the best at cooking, but who else is good at cooking? What is everyone’s speciality dish?

O: Well then, I’ll be presenting to you what each member is best at making.

Luffy: Raw Meat on a Plate,

Sanji is the best at cooking seafood, but he is overall good at making just about anything. Also, this has to do with how these characters grew up, but generally the ones other than Sanji who can actually do some decent cooking would be narrowed down to pretty much Nami, Usopp, and Robin.

Momonosuke has the ability to communicate with the giant elephant Zunisha, being capable of seeing through its eyes and giving it orders, which is the only way it can do anything but walk. 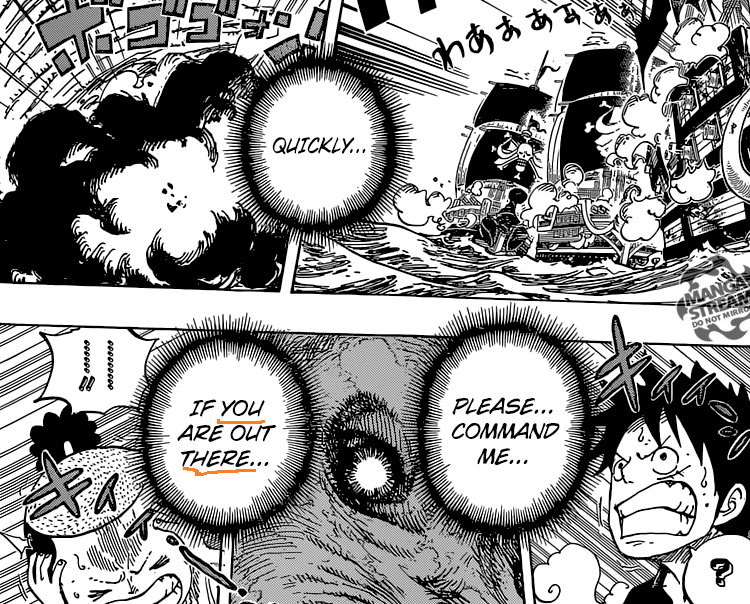 Should Momonosuke order it to attack, he is in command of a powerful weapon capable of wiping out fleets in a single blow. Like his father, Momonosuke also has the ability to hear the “Voice of All Things”.

It transformed him into a serpentine dragon which allows him to seemingly fly, when in actuality he somehow produced clouds that he was able to grab onto and climbed up that way.

However, as he has only eaten this fruit recently, he does not seem to have much control over it yet, and in fact transformed unwillingly into his full animal form shortly after consuming the fruit. He did not know that he could produce and climb clouds, as he told Luffy he was stuck in the garbage dump when they met there. 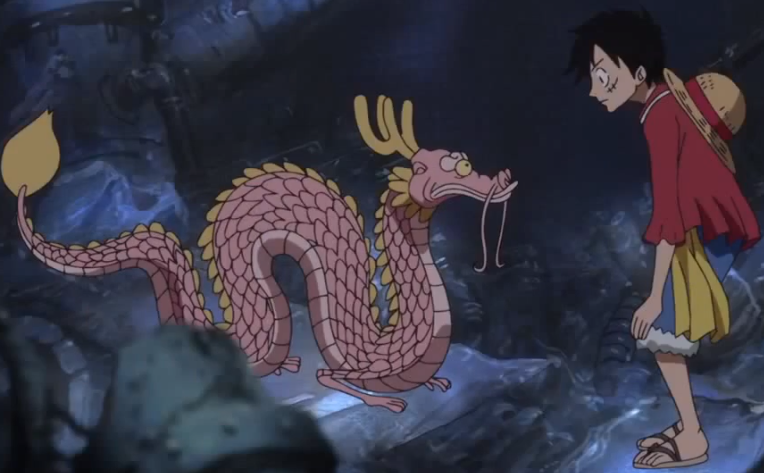 When he was frightened by a hunger-induced hallucination, he unconsciously used his cloud ability to escape with Luffy clinging to him. 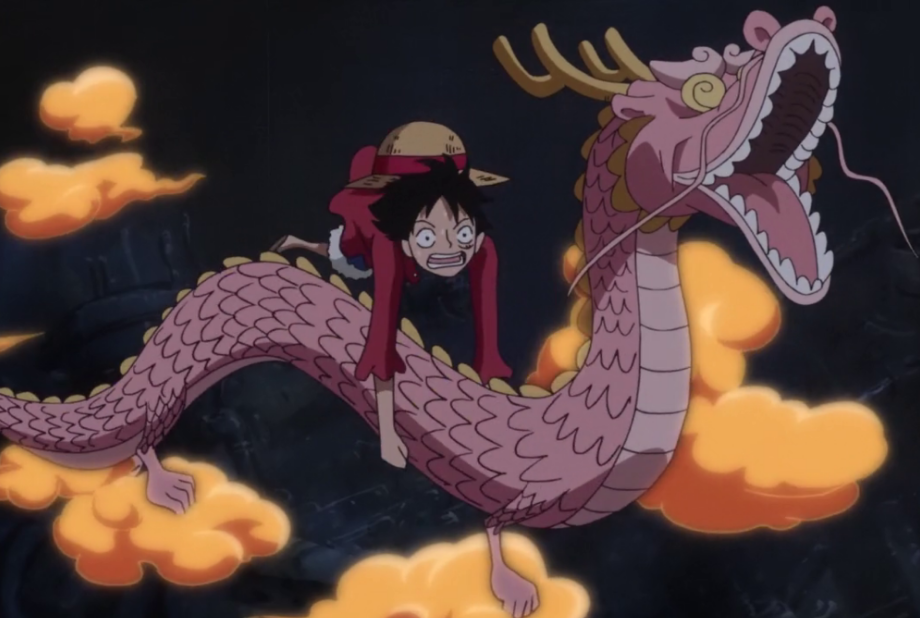 He also did not know he could switch forms until Luffy told him. It is also possible, though, that he has no conscious control over his power because the fruit was artificial and a failure. He showed the ability to revert back to his human form when he reunited with Kin’emon. However, Momonosuke is shown to switch forms from time to time.

D: How is a volume of comics created? Like, where exactly does the “name” get decided, and everything? Please tell me. 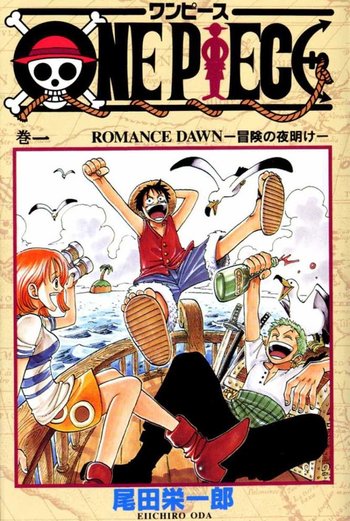 O: The “name”. Ah yes. I do the “Great Name Introduction” in these books sometimes. I’ll give a full explanation of the order it goes in. The entire schedule we go through to get this book into your hands.

Step 1: Space Out
Space out dejectedly.

Step 2: Meeting
Talk to the people at Jump about what will be in the next chapter.

Step 3: Planning
Think about what will actually go in the chapter.

Step 4: Name
Write a “name” on a blank piece of paper.

Step 5: Show the Name
Fax the name to the boss. If he doesn’t like it, we fight, or I rename it.

Step 6: Master Copy
Call the assistants over to my house, and we go nuts for 2 or 3 days. We draw the master copy.

Step 8: Meeting
Now I talk with the high-tech boss Y-san about the cover of the book and how to color it.

Step 9: Make the Extras
Draw the cover pages and make the SBS.

So this is basically how it works. Well, this is my schedule, but all artists have their own pace. Just consider trying to draw before coming up with a name for your master copy is like manga artists’ block.

D: Odacchi, greetings! I’ve been harboring some doubts lately. In Chapter 277 of Volume 30, when Luffy is trying to escape from the giant anaconda, he opens up the snake’s eyelids, but how can he do that when he’s inside the eye? Please ask Luffy how he did that!! 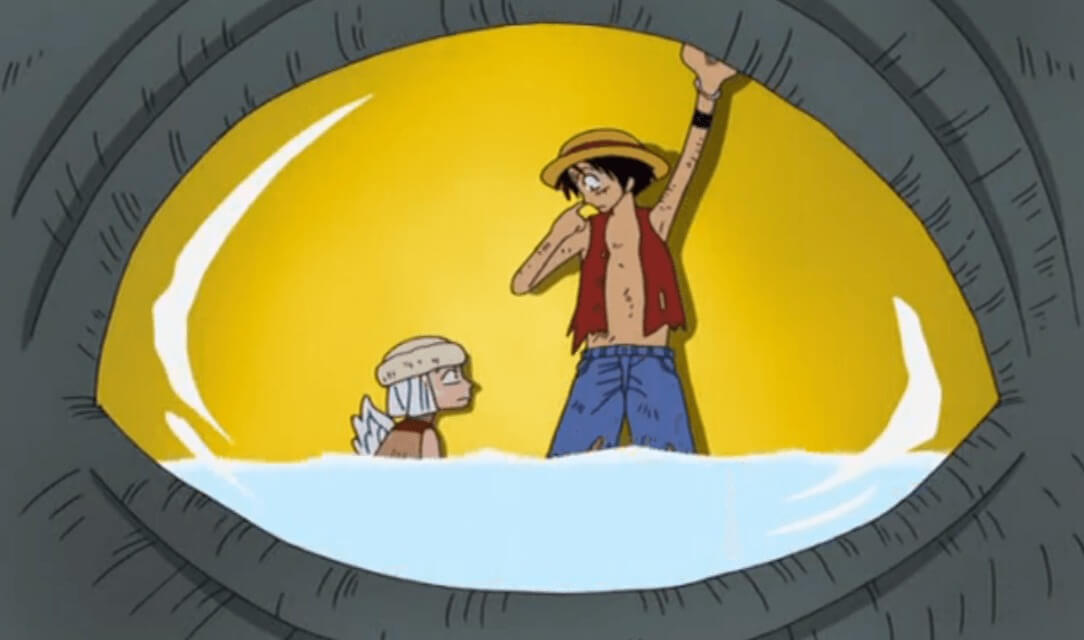 Luffy: What? What’s the problem? There’s nothing wrong about this.

O: Yes there is! How do you raise the eyelid from inside the eyeball? And while we’re on that subject, how can you be INSIDE the eyeball in the first place?!

Luffy: It’s all right, don’t worry about it. Wasn’t it funny? 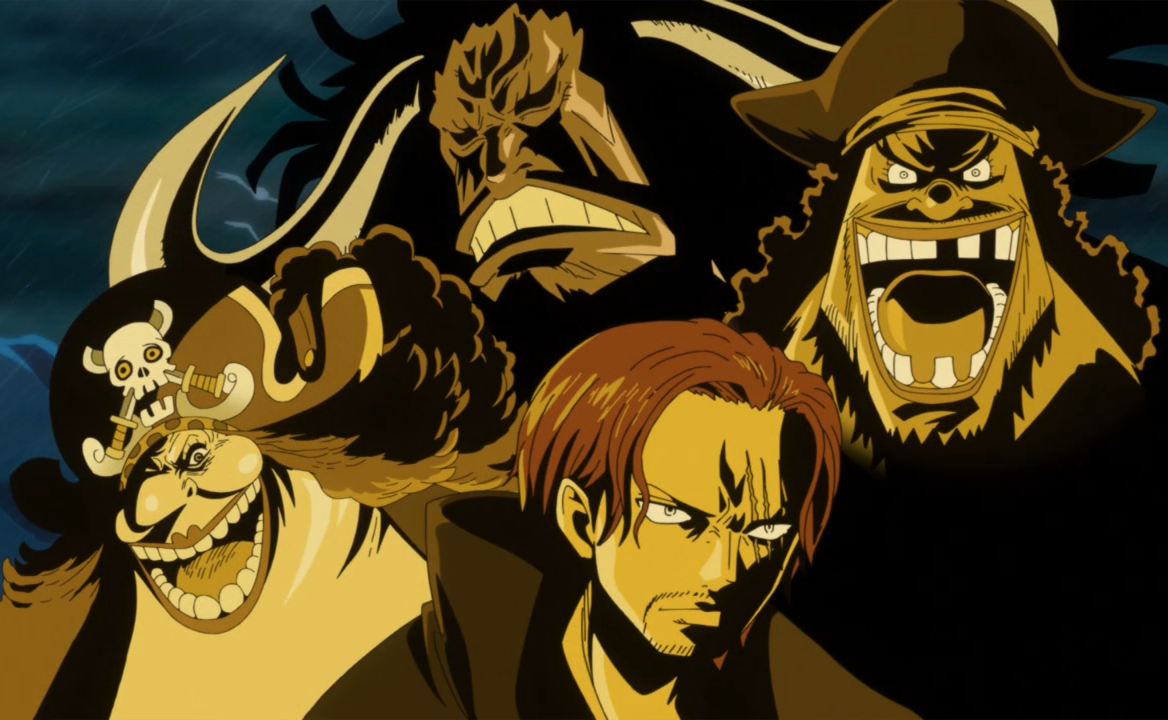 All of the the Eleven Supernovas are known to be involved with at least one Yonko: 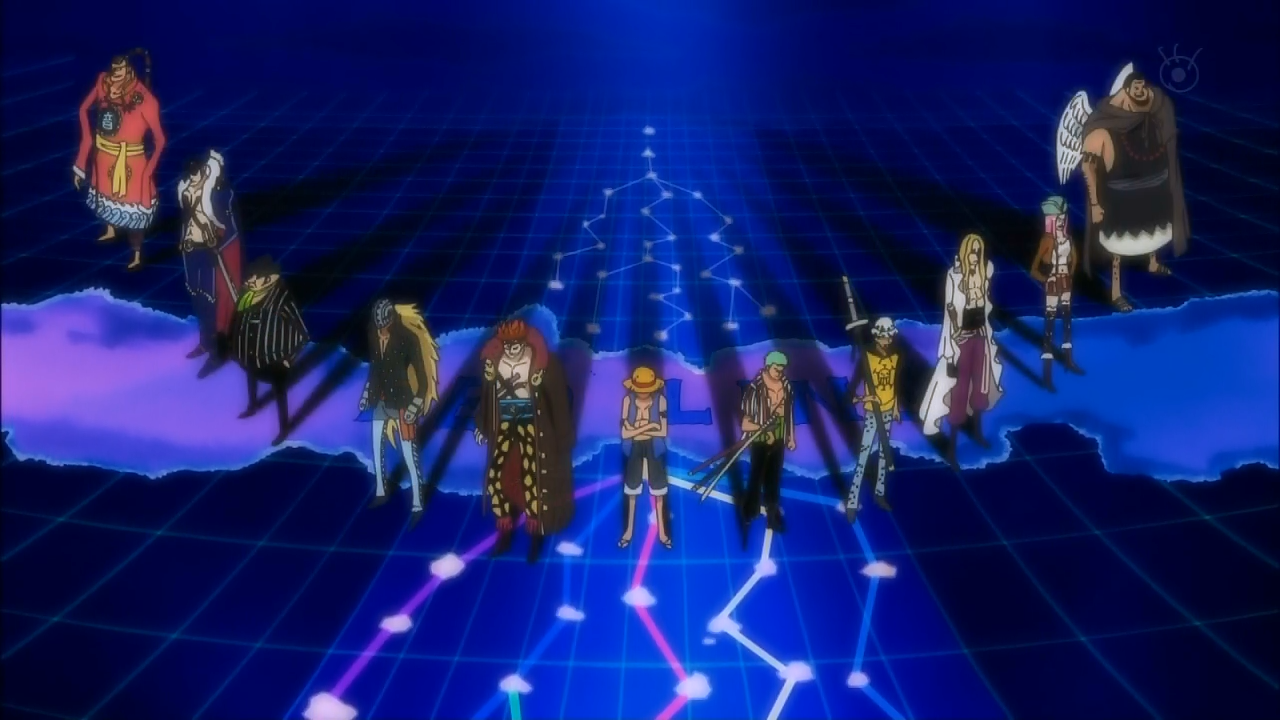