D: In chapter 654, Chopper turns down Nami’s invitation to join her in the bath, saying “I wiped myself down the day before yesterday”, right? Is it because he’s a boy? Or a fruit user? Or maybe… because he’s an animal? I’m also interested in the bathing information for the rest of the Strawhat crew. Penname- Katana Roman 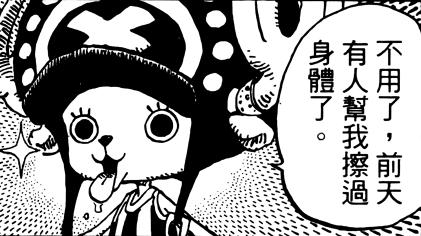 O: Well, in Chopper’s case, I have a strong feeling that perhaps it’s because he’s an animal. Wiping his body down pretty much counts as a bath for him. Sometimes, the men of the crew have a Great Bath Party together and get really rowdy. Chopper gets invited to bathe with the ladies a lot, but he prefers the men’s parties.

Previous Entries "One Piece: Unlimited World Red" Will Be Coming To PS4 and Nintendo Switch This Summer Next Entries Did You Notice?