According to the first advances of the 38 number of “Weekly Shonen Jump”, which is available from Monday 21 August 2017 in Japan, the animated series Dragon Ball, Dragon Ball Super, and One Piece – both produced by Toei Animation, they will have each a special episode by the duration of an hour, and then divided into two episodes. The whole is planned for next autumn. This Fall, One Piece and Dragon Ball will have 1 hour specials over 2 weeks. Key Visual to be revealed next week. (Might be a crossover) pic.twitter.com/ChEPjlxBFd 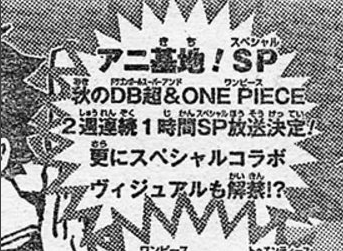 At the moment it is not yet clear if this is a special episode crossover, where the two universes merge into a single common history, or if the two series separately, will have an episode of an hour (divided into two weeks). From the moment that One Piece and Dragon Ball Super are transmitted both on a Sunday in Japan, other theories want the two episodes to go in one wave behind the other so as to occupy an hour, and in this case, the hypothesis of a crossover would be closer to reality.

However, in the next issue of the weekly magazine, the 39°, will be provided the key visual and we expect more information about.

Of course, if we’re going to learn more details first of next week, we will inform you promptly.