As the end of the Whole Cake Island arc draws closer to its conclusion, many people wonder if Sanji will get a 1v1 and a chance to prove himself as a fighter at all. While there have been many predictions and theories into a potential power up for the cook, I feel that one obvious possibly isn’t being discussed. I suspect that by the end of the arc, Sanji will face off against Ichiji (see Joy_Boy Theories video on this) defeating him using a black-clad form of armament haki. In short:

So, what evidence do I have to support this?

Throughout Whole Cake Island, all of Sanji’s losses have been open to question. I believe he CHOSE to lose all of these fights. In his battle against Judge, Sanji appears to be outclassing and surprising his father throughout the fight. Only by using cheap and dirty tactics is his father able to get the upper hand on Sanji. We even see Sanji express concern for the wellbeing of the Germa soldiers used by judge. 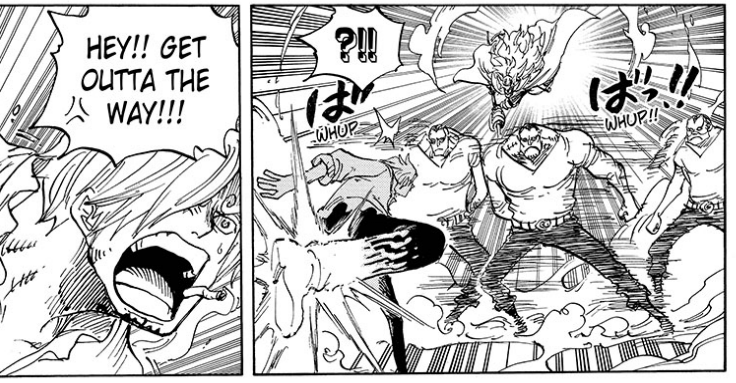 After being hit by Judge’s sneak attack, we see a panel of Sanji expressing a contemplative look on his face. His mouth is shut (unusual for someone who was just struck) his eyes hidden behind his hair (typical in shonen when a character is acting or hiding something). In the very next panel, we pan to the Germa soldier, as if in direct reference to who Sanji is thinking of. 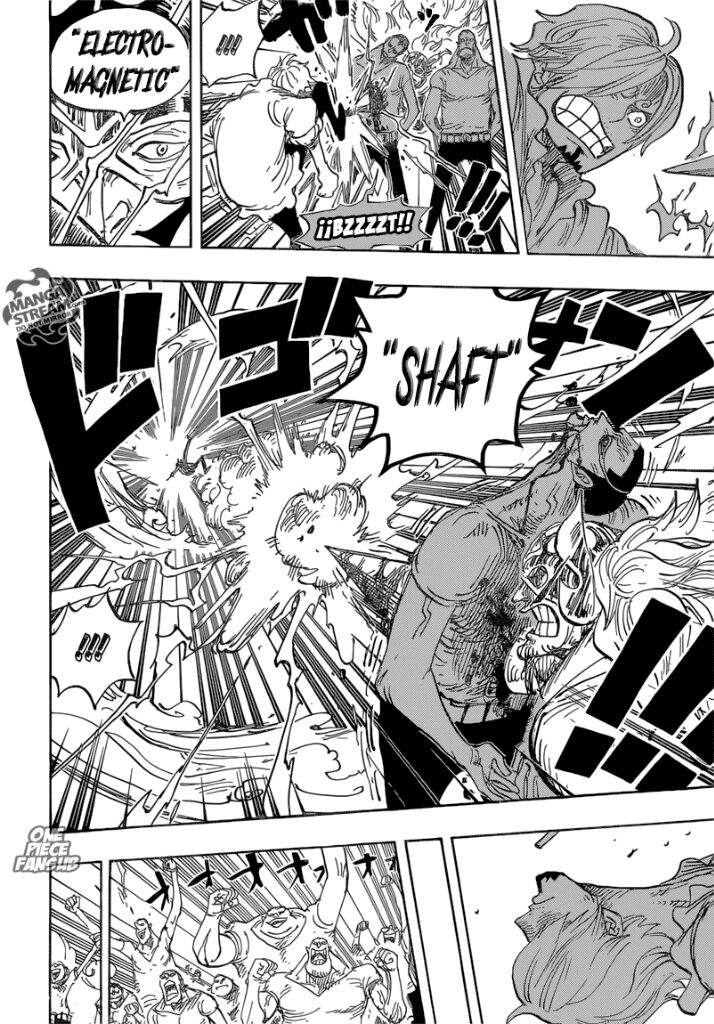 I suspect that Sanji chose to take a dive in the fight against Judge in order to save the Germa soldiers that likely would have been sacrificed had the fight continued. A similar hostage situation occurs in his “loss” to Niji, threatening Owner Zeff’s life should he fight back. As Reiju has said, Sanji is just too kind.

The only person who has fought an unrestrained Sanji is Yonji, and that was done off screen. However, I think Oda has given us enough clues to point to how Sanji was able to best his brother.

Whatever kicking technique he used, it was clearly strong enough to dent his brother’s head. When angrily attacking Niji, we see the other brothers’ reactions. Ichiji is calm, while Yonji is clearly alarmed, possibly nervous (you can see him sweating). This is because Yonji is the only one who knows what Sanji is actually capable of, and he’s scared of the idea that things won’t be as they have always been. 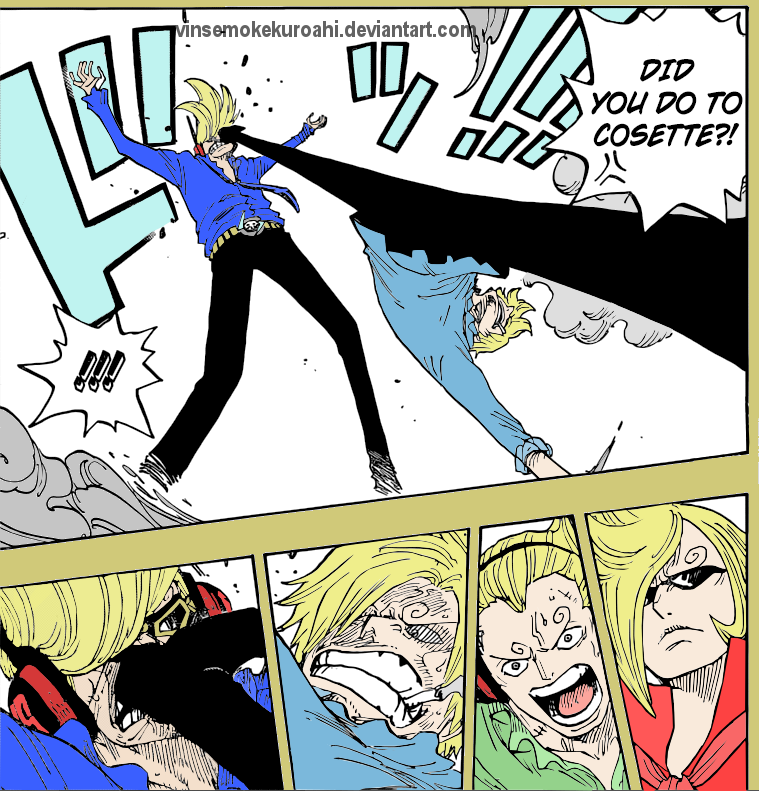 So what? Sanji’s strong, we get it. How does this indicate that Sanji can use black armament haki? In the arch, Oda first starts alluding to it during Sanji’s fight against his father. 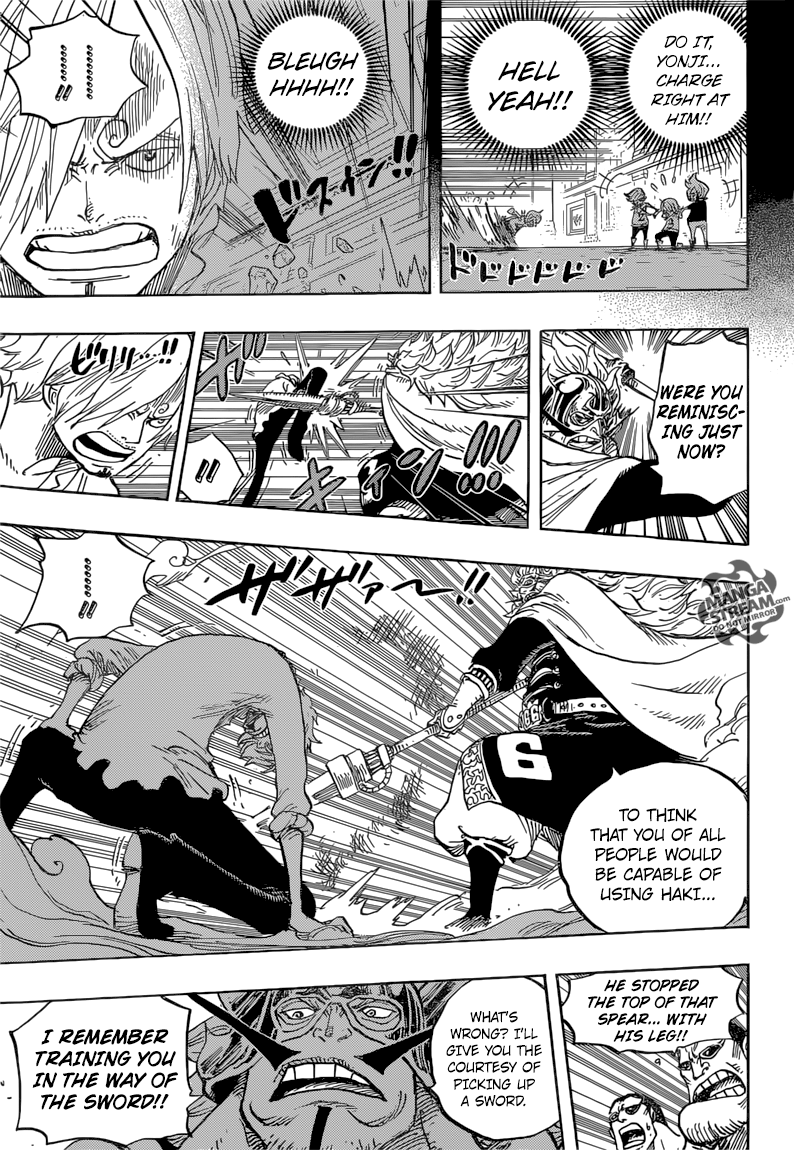 While not cannon, the anime chose to include an interesting quote from Reiju during this fight (anime episode 793). Despite being able to block Judge’s spear with his leg, “It seems like he’s taken some damage though.”

This remark is somewhat reminiscent of when Vergo managed to crack Sanji’s leg in Punk Hazard. Sanji notes that “This guy’s like a mass of iron or something.” I’m not going to go into detail about the iron-iron fruit theory (as many have) but I am of the opinion that he is an “iron-man.” At the very least, Vergo’s very hard.

Reiju’s comment alludes to the fact that had Sanji used a stronger form of haki (in either situation) he would have avoided injury. The outcome of Sanji’s fight with Yonji was entirely different. He managed to kick his head in with such force that he needed machines to smash it back into place. 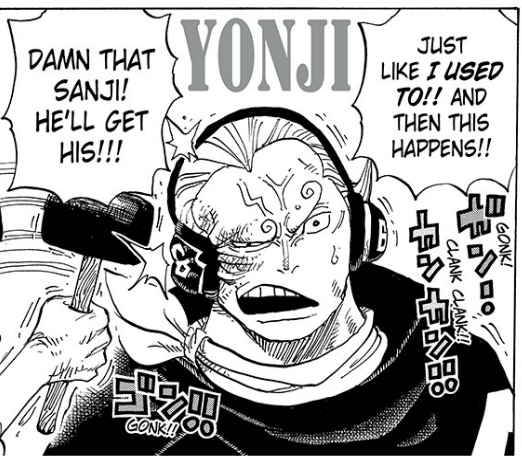 How was it that Sanji was able to severely dent his brother’s body while not being able to do the same or at least damage Vergo (someone who does NOT possess a genetically modified body w/ a durable outer skeleton)?

It’s evident to me that he used the black color of arms to do this, which is why it was off-screen. Oda wishes to save the reveal until his final fight of the arc. This is further supported when Sanji lands a clean kick to the face against Niji. They both have the same outer skeleton. Despite being angry at Niji, did he simply choose to kick Yonji harder (despite having not attacked a woman and further provoking Sanji)? No, he kicked as he normally would, but he simply didn’t use haki.

Some may argue that if Sanji was capable of this already, why didn’t he use this against Vergo? Sanji likes to fight smart and use his head, figuring out what his opponent can do before revealing what he is capable of. However, he didn’t expect Vergo to start using haki so abruptly, which is why he was taken off guard. Even after the fracture, he is able to keep kicking with the same leg, showing that he adjusted to match Vergo. And once again, the fight was cut short by the poison gas before we got a chance to see what Sanji would pull out next.

The most persuasive and obvious piece of evidence for this is his nickname, “Black Leg” Sanji. The name is in reference to both his fighting style and his mentor, Red Leg Zeff. While yes, the name initially seemed to suit him due to his attire, but the name now has other implications. The nickname refers to his kicking technique, the way in which he fights. Don Krieg foreshadows this when referring to Zeff’s former skill and notoriety (manga Ch. 48).

Zeff’s nickname comes from the fact that he kicked in such a way that his boots were always stained in blood, hence were always red. As master and student, their techniques are certainly similar. However, Sanji will gain his reputation from his own unique style. Instead of blood, Sanji’s Leg’s will be “died” black with haki. 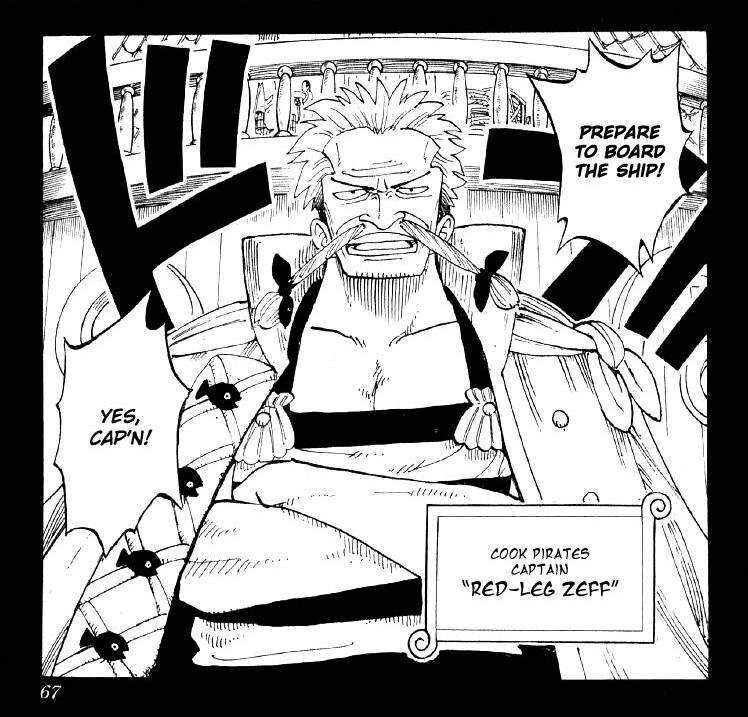 In conclusion, I personally think most fans are trying too hard when thinking of potential power ups for the cook (genetics, etc). We haven’t seen him use a visible, black-clad form of armament haki yet. While I’m not ruling out other theories as to future powers that may present themselves in following arks, I think this is what’s coming next!