I looked around some other theories about the same topic I’m covering in this one but I didn’t saw in any of them a thing happened long ago that is foreshadowing this topic and I would like to bring up to just add more consistence to future “Zoro’s flame sword techniques” to really happen and how it could work.

So let’s start like all the other theories of this kind starts, in manga chapter:

In this chapter “Sanji-Nami” finally recover the corpse of Kinemon from the bottom of the lake and he is oficially presented on page 14.

Then in Page 16 when they need to scape from the Slimes back to the research facility Kinemon says: 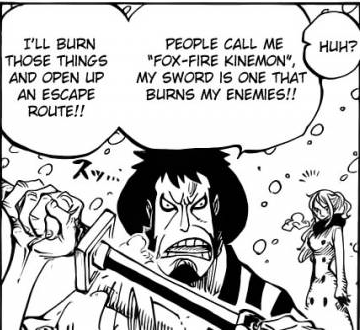 I think Kinemon is being literally when it says “My sword is one that burns my enemies”, so his sword has some kind of soul or power related to fire wich Kinemon can and know how to use.

Then on the next page (17) explosion happens and we can see how Zoro became very attentive on what is doing Kinemon.

Finally in the last page (18) we get some serious panels: 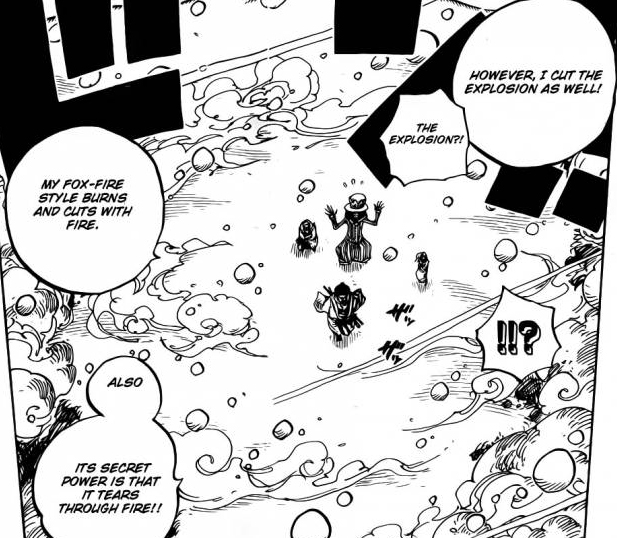 On the left we can see Kinemon explaining “how works” his power. On the right side he says “I cut the explosion as well!” which I believe is a reference/easter egg to a past event seen in manga and referenced later in this theory. 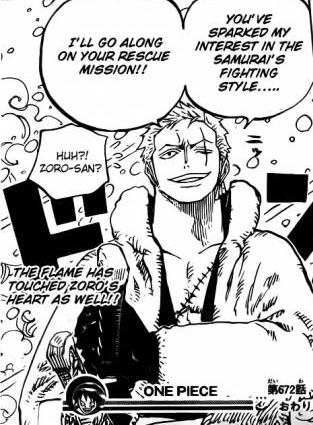 And finally this one that makes completly undoubtable that Zoro wants to learn that kind of techniques and samurais fighting style.

In this chapter the group is attacked by the dragon inside the research facility while they are sitting over BrownBeard, the one who runs for them all. 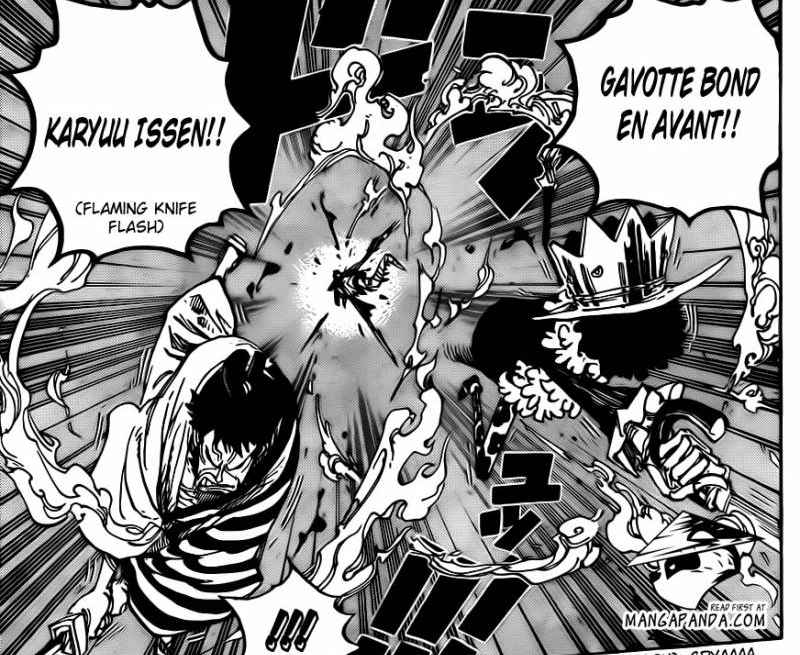 From this panel take a look at the way of the flames around the path of Kinemon’s sword.

And now lets go way back in time and see what GOda did:

This is the chapter where the arc’s main battle ends and when Zoro breaks free from candle cake while it’s burning.

On page 8 Zoro starts the attack:

On page 9 Zoro performs the attack with a massive panel: 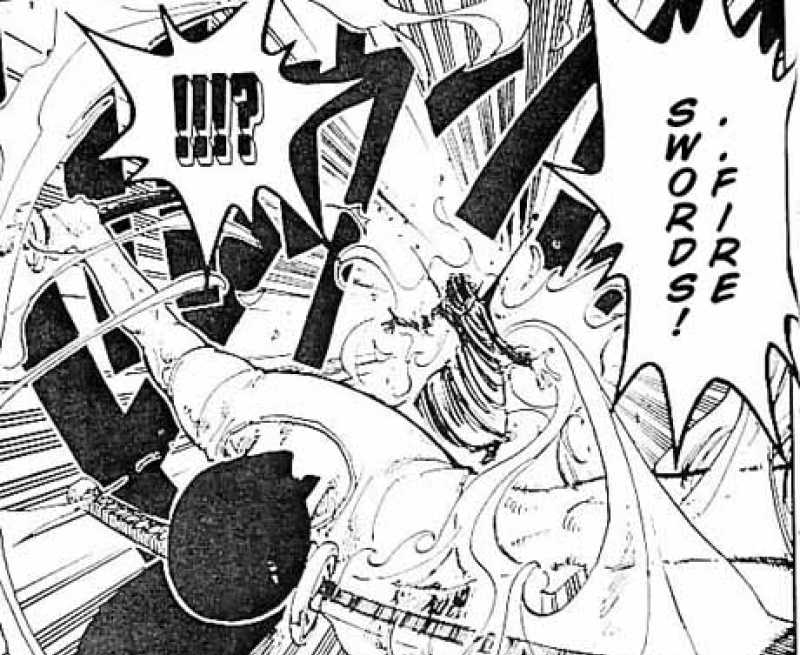 So he’s using a technique called: Killing Evil Fire Swords (Yaki Oni Giri).
This looks very similar to what Kinemon did in chapter 682 when cutting the dragon, the flames following the path of the swords. And he’s cutting Mr 5, the man who could make any part of him explode, kind of cutting an explosion like Kinemon says he did, at the end of chapter 672.

And just to finish this section on page 10:

In this chapter Zoro begins to battle the people of Whiskey Peak. 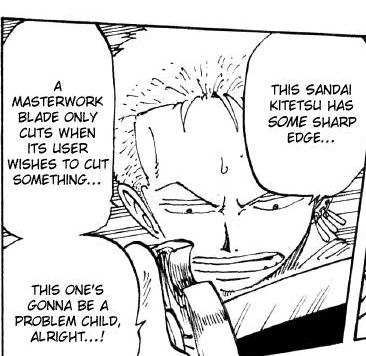 “Blade only cuts when its user wishes to cut something” This could mean that the cursed sword could have a soul inside.

In this chapter Aqua Laguna is almost on Water 7, Robin departs on train with CP9 and Zoro gets trapped inside a pipe.

When Chopper arrives with Sandai Kitetsu where Zoro is trapped, on page 11: 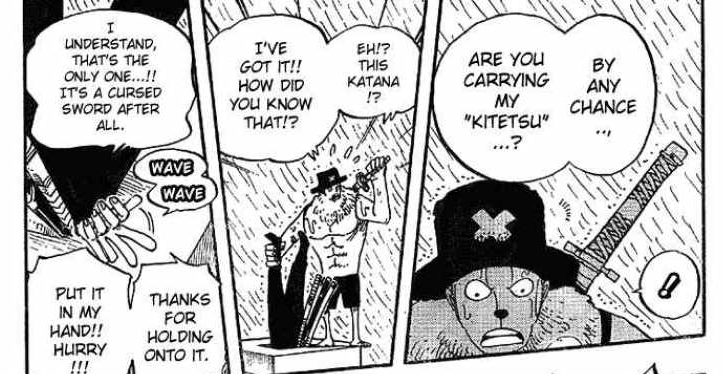 Zoro’s answer “It’s a cursed sword after all” means he can sense the soul of the sword.

Based on what Kinemon says in 682 “My sword is one that burns my enemies” and Zoro’s sense for his cursed sword on 108 and 363, seems that some swords have some kind of power/demon/soul inside of them. It would implie that some of Kinemon’s swords are cursed or have a soul, which would probably mean he’s carrying a Wazamono.

The situation at Little Garden makes a perfect sense to the flame sword attack, but because of the similarities between that panel and the one with Kinemon and Brook I seriously think that he could make the flames follow him because of the Sandai Kitetsu’s soul interacting directly with Zoro or with the fire around.

This also could be explained by Brook sword techniques, wich aren’t related to his Soul Solid’s soul but to his power interacting with the sword. Because of his power and his condition of resurrected soul he can make ice attacks which could be paralel to a soul or a part of a soul inside a sword with elemental power possibilities.
And the paralelism between Brook powers and sword’s souls elemental powers could be supported by Prometeus and Zeus, wich are a fragment of Big Mom’s soul attached to a flame and a cloud pointing that souls can interact with elements.

So in conclusion Zoro will learn about Sandai Kitetsu’s soul and maybe some of the other sword’s souls while in Wano adding an elemental powerup like fire, ice, electricity and/or wind. And probably, but this is completly speculation, there will be some disclousure about cursed swords and/or Wazamono in general in the process of learning samurai techniques.