Proof number one: When Luffy and Co entered the Grand Line they encountered Crocus which envisioned Raftel: 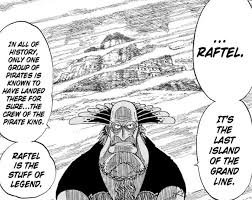 – The vision behind Crocus suggests that there was civilization there considering the island has what seemed to be windows, so it wasn’t uninhabited always. Anime’s ”clear” vision of the island:

Proof number two: During Skypiea, Roger left an engraved message on the golden bell that Robin later finds with the Skypieans and Shandia warriors. Robin comes to the conclusion that she has to physically travel to Raftel to get to the bottom of the Void Century: 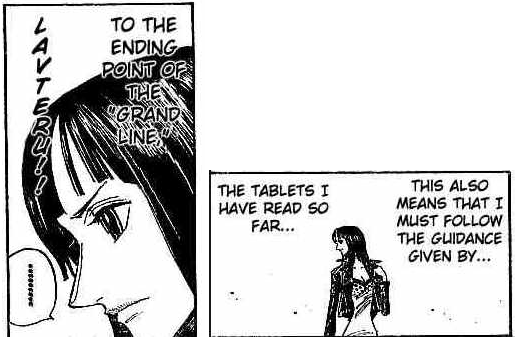 (Sorry for not combining it to one picture, i’m stupid when it comes to this). We already know the Great Kingdom is related to the Void Century because it disappeared straight after.

Proof number three: During Robin’s past we find out that Clover and the rest of the archaeologist team learn about the Void Century to that point it frightens the government, we are told that the messages that are past on the poneglyphs are meant to be indestructible so that the World Government wouldn’t be able to destroy evidence of something they want to hide. During’s Clover envision we could see the Great Kingdom’s image clearly but he states that all information on that place has been erased to cover it up… As he was about to say that place’s current name he was shot dead because he knew too much.

Proof number four [the conclusive evidence]: During Zou, we learn about the Road Poneglyph which supposedly leads you to Raftel after you find four of them, the important thing that we learn from that though is the fact that the poneglyphs are 800 years old – So why would the road poneglyphs lead us to Raftel? That was way before Gol D Roger was born, way before the great pirate age had begun, why go through the trouble to pass down four indestructible stones that would lead us to an island where there is supposedly a big treasure that Roger had left? The only conclusive answer to this is non other then The Great Kingdom. The Void Centrury came to a close 800 years ago – It all connects, there’s absolutely no doubt about what Raftel is!

Previous Entries WHY DOES JUDGE HATE SANJI SO MUCH? Next Entries Is Kizaru hunting for Aokiji ? Did he find the connection between Nico Robin and Aokiji?